Playstation 4 exclusive Horizon: Zero Dawn launched in the UK on March 1st to critical praise. The first new IP from renowned Killzone developer Guerilla Games marks a significant department as a studio. Switching from First-Person to Third-Person and  linear shooter to full blown open world, the risk and creative potential were huge in equal amounts.

We were lucky enough to get out hands on the Collector’s Edition and we gotta say, it is A-MA-ZING! Right up there (literally on my shelf) with The Witcher 3’s Geralt fighting the Griffin. 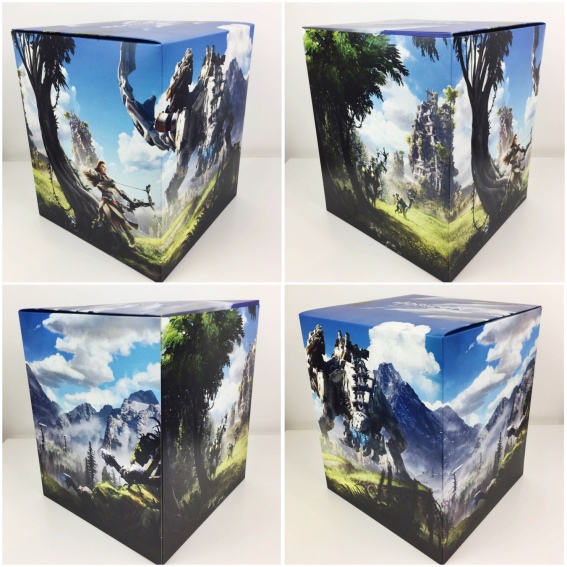 Featuring a truly stunning 9″ statue of Aloy standing over here kill, the colour and detail is a thing of beauty and essential for any avid collector. Check out our gallery below for some close-up detail shots: 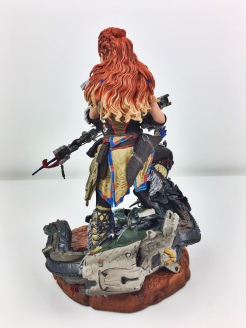 It’s not just a dazzling stature you get in this collection though. The complete list is as follows:

Fashioned by the proud, ceremonial Carja tribe, this special armour has been crafted with an eye for showy appearance.

The Carja defend their great Sundom with stone fortifications and military might. This finely-made bow, fit for a captain’s hand, puts additional stopping power behind every arrow fired.

Rare and precious Machine parts are always in demand on the metal markets of the Carja Sundom. The contents of this pack can be traded towards exotic weapons, outfits and other equipment when you visit the fabled city’s merchants. It also includes crafting resources to let you put your new armaments to use as quickly as possible.

A sturdy outfit made by the nomadic Banuk tribe, hunters and shamans from the harsh northern territories.

The Banuk claim a spiritual understanding of the Machines, and put their harvests of Machine parts to many uses.

Though rarely encountered, Banuk explorers have left their intricate tribal marks across the breadth of the known world. This pack contains stocks for fast, safe travel between previously discovered locations, allowing you to avoid the dangers of the open trail. It also includes ammunition crafting resources for you to stock up before your journey.

The Nora are extraordinarily skilled and inventive at using machine components in their own devices. The crafting resources in this package allow you to create mines and traps that can tip the hunt in your favor before the first arrow is shot.